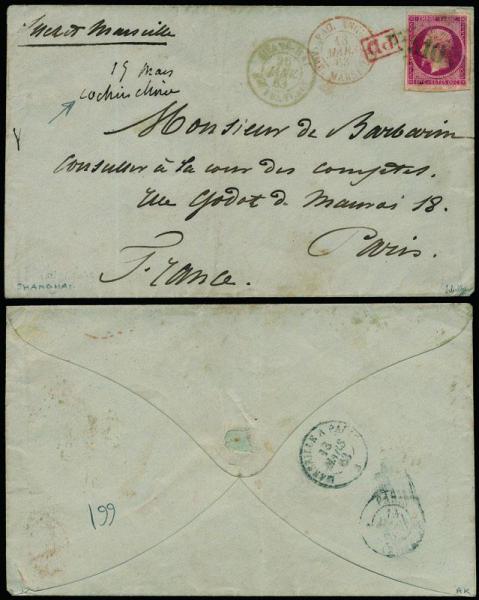 1863 (Jan 26) Shanghai to Paris, France cover, f.w. stamp, believed to be the 1st cover franked with stamp and sent out from China. This cover f.w a French 80c stamp, canceled by diamond shape 5104 postmark, along with Shanghai French PO originating cds., a PD cachet and a French Paquebot cds., on reverse showing Marseille to Paris transit and Paris arrival cds. VF-F. rnAccording to Raymond Salles, the Postmaster, Mr. CHAMPANHET, arrived in Shanghai on December 19, 1862, by the British steamer linking Hong Kong to Shanghai. Brought with the datestamps and 5104 postmarks. At first, he was only able to send dispatches by British steamer: on January 9, January 26, 63 and February 9, 63. The first stock of postage stamps arrived by the HYDASTE on February 12, 1863. This cover was sent by the 2nd British steamer on Jan 26 while the stamps were not yet officially arrived. Hence, the postage stamp on this cover might probably brought by private hand. Extremely important cover of Chinese philately. With certificate by French expert.